Here are some responses to the flood of emails that have landed over the past few days since the launch of what we’ll call Blog “v2”.

Original Blog – I’m in the process of “replanting” the initial 2008-15 blog which chronicled several years of trading diaries and formed the central foundation for Chronicles, and will eventually post a link to it on our new home. 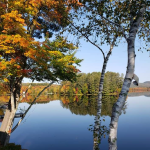 Move to Maine – Yes, I’m loving it. I’m also typing this during the Season 7 launch of Maine Cabin Masters on DIY Network which has become my fav home improvement show. And yes, this new site’s cover pic (click to enlarge) was the view from our deck just a month ago.

Simplicity – We’ve downsized, sold real estate holdings into the Covid house price surge (forever a trader), and I’ve remained largely off the investor/trading public circuit following our incredibly fun two-year MDTN run. Suffice it to say we’re in the “less is more” phase of our lives, and I’m loving the ability to pick and choose what to do, when, and for whom. I’ve declined a number of public investor forum and interview requests, and will likely continue to do so for a while and “simply” limit public focus to “looking over my shoulder” diary entries, which – after all – is where it all began. There’s such a fine line where “fun” becomes “obligation” … lessons learned.

Time Frames – For those asking for my grid of optimal trading periods, here’s a link to the matrix, keeping in mind we’re in the EST portion of the year where there’s only an hour break between the U.S. ETH session re-start and Nikkei open. 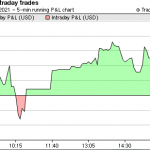 TraderVue – Someone asked whether I still user Tradervue’s analysis tools, and the answer is yes. One of my favorite tools of theirs is the running intraday P&L, which provides me the best visual of the day’s profit management. For example, the chart to the left (click to enlarge) was mine from today.

“Free” ETF Trading – Following up on last week’s comments re: ETFs, the ability to trade with essentially zero transaction costs (aside from the SEC fee on the sale side) remains a boon for traders. For example, today’s trade for me consisted of 54,808 shares traded for a whopping transaction cost of $81.44. And yes, I still own a CME IOM seat. ‘Nuff said.

Trading After Dark – All of the “original” TAD videos have been preserved and are accessible via the menu of our new home. I know others have since coined the name, yet that’s no biggie at this end as we’re all family. We’ll do another few in the near future.

TOS Script Typo – Thanks to one of our readers who pointed out a typo in last week’s script posting.  The typo has been corrected in the initial post.

I guess that’s it for now.  Thanks to the warm eMail welcome, and it’s nice to get back into some kind of cadence as I look to make some productive use of some late-day time. Comments always welcome via our new email don@traderchronicles.com.